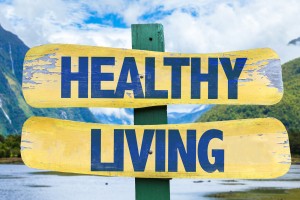 It appears that some things never seem to change – especially when it comes to living a healthy life.

I recently picked up a monthly periodical that was entirely dedicated to the wisdom of living a healthier life, including in-depth insight about nutrition, weight control, hypertension, heart disease, emotions, chronic ‘tiredness’ and a host of other factors affecting our physical and mental well-being.

Interestingly, the publication spent over half its content on just one person, Vic Tanny, who, at the time, was considered to be America’s greatest crusader for obtaining better health and moving the U.S. into a more physically-fit nation. Tanny, I learned, founded the Vic Tanny Gyms.

Vic Tanny? I was not aware of this man, nor his efforts.

All articles within the publication effusively portrayed Tanny with such glowing accolades concerning his numerous accomplishments that it left this reader wondering if the publication was more of an infomercial than well-balanced journalism. One example: “Vic Tanny has wrought more changes in the concept of the gymnasium in twenty-five years than all the physical educators of the preceding two thousand years combined!”  Wow!

Tanny is also full of confucianisms that reflect on how we must approach our lives to receive two of the greatest blessings – good health and good intellect. He passionately links our fortunes of good health to what we eat, the regular exercise our bodies require, and our emotional health – all directly linked with one another. Here are just a few examples of the philosophy he shares about health:

We have been guilty of neglecting our heritage of strength, allowing our national physical fitness to degenerate by lack of physical activity.

The modern diet creates flabbiness and obesity, especially if overeating is combined with insufficient exercise. It may safely be asserted that obesity is a disease.

Exercise is essential to human life and health. Daily exercise, properly taken, would restore many semi-invalids to health.

We cannot buy health; we must deserve it.

It seems reasonable to believe that if people exercised their entire bodies as constantly and vigorously as they habitually use their minds, their physical and mental strength would endure equally. 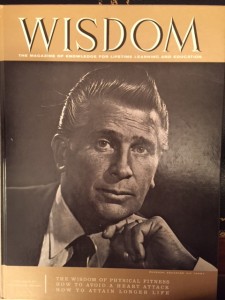 Tanny was not talking about the problems of today – 2015 – but sounding the battle cry one-half century ago!  The particular periodical that I was reading, Wisdom Magazine, was published in May, 1961. Similar in size to LIFE Magazine, Wisdom first appeared in 1956, typically featuring world-renowned Yousuf Karsh photos of famed intellectuals and artists on both covers and on the main inside feature. The articles were full of rich content about art, biographies, business, education, government, history, law, literature, medicine, music, philosophy, religion, science, world affairs – you get the picture. Wisdom Magazine truly fulfilled its promise of being “The Magazine of Knowledge and Education.” Unfortunately, Wisdom met its fate in 1964 and is no longer published.

The world has greatly changed in 54 years, yet, when it comes to the health of Americans, the problems we face today with diet and exercise are nothing new – only the numbers change. In 1960 America, 54.2 percent of adults were not overweight or obese, yet by the year 2000 (40 years later), only 29 percent met this measurement. Conversely, over 14 percent of Americans were either obese or extremely obese in 1960. Today, this number is about 35 percent.

Tanny was on to something back in the 1940s – 1960s. As for Tanny?  His legacy is primarily known as being the American pioneer in the creation of the modern health club. His clubs, however, folded in the mid-1960s, with many locations becoming part of the Bally Total Fitness Clubs.

Tanny died in 1985 at the age of 73 due to – heart failure, precisely the fate he wished for Americans to avoid.

To stay abreast of employee benefits and healthcare issues, we invite you to subscribe to our blog.