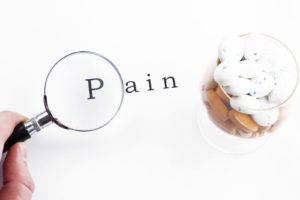 One medical topic clearly on today’s radar is the use (and abuse) of opioids – medications that are often used to relieve pain, such as: hydrocodone (e.g. Vicodin), oxycodone, morphine, codeine and other related prescription drugs.

It is relatively easy to become addicted to opioids. Like many others, I have been prescribed various opioids (typically Vicodin) in the past when having lower back pain or a dental procedure that required pain management. Thankfully, I used only a very small portion of the prescribed pills during each incident, which resulted in the accumulation of many ignored (and expired) bottles in our medicine cabinet.

For many, the continued use of opioids to control pain may quickly evolve into a habit, and eventually, addiction. Without seeking and receiving appropriate rehabilitation for opioid addiction, accidental deaths happen far too often. In 2014 alone, the number of opioid deaths due to overdose in the United States was 28,647, a number that exceeds the size of Marshalltown, Iowa’s 16th most populated city. A 14 percent increase from 2013, this number represents an age-adjusted rate of 9.0 Americans per 100,000.

The Kaiser Family Foundation analysis shows that 158 opioid fatalities occurred in Iowa during 2014. With an adjusted death rate of 5.3 Iowans per 100,000, Iowa ranks considerably below the U.S. average. The adjusted rates of fatalities per 100,000 for each of Iowa’s six neighboring states are listed below:

The below-average rates for Iowa, Nebraska, South Dakota and Minnesota leads one to ask, “What are these states doing differently?” Have these states implemented actions preventing individuals from becoming addicted and treating those who are addicted? Do they have narcotics detectives and emergency medical technicians who help guide individuals to treatment rather than arrest them? Some states have indeed implemented programs to address this emerging topic of national concern.

The Center for Disease Control and Prevention (CDC) recently released guidelines to help physicians prescribe opioids appropriately and responsibly. The opioid crisis should not just be the concern for providers who prescribe opioid medication. In fact, everyone has a role to play mitigating this epidemic, including those addicted and their family members, those who treat the addicted, educators, law enforcement agencies, and the efforts of a well-coordinated community. As two authors commented in a recent Health Affairs publication, the opioid crisis is “a multi-faceted problem [that] requires a multi-faceted solution.”

For each of us, a frequent reconnaissance of our medicine cabinets to ‘search and safely dispose’ is a good first step to eradicating opioid misuse and abuse.