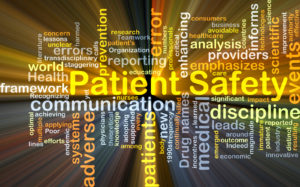 Patient Safety Awareness Week began on Sunday. Therefore, it is only appropriate to commemorate this week (and all following weeks) with awareness about safe patient care among healthcare professionals and the public.

Much too often, patient safety is overshadowed by other healthcare-related issues (and agendas), such as expanding insurance coverage in state and local markets, medical and insurance mergers and acquisitions, and the opioid crisis – to name just a few. Some issues can’t be appropriately addressed soon enough (e.g. opioid epidemic), while other agendas are more about obtaining growth through acquisitions, often in the guise that more ‘value’ will be created to benefit the patient and the public. In healthcare, it appears optics is an extremely important and powerful tool.

So why is it so hard to make healthcare safer? There are many reasons, but four primary culprits stand out above all others:

We all know that healthcare is complex. Much of it is due to flawed systems that are laden with unclear and distorted regulations often resulting in unintentional consequences which adversely impact patient care. Additionally, poor organizational safety cultures and communication practices compound the previous two reasons for unsafe care.

Much of the patient safety problem stems from not having a ‘business case’ to do the right thing at the right time. Business models are dependent on incentives – strong incentives – that will steer behaviors to the desired goal(s). When it gets down to it, inadequate financial incentives stunt the necessary initiatives required to spark safer patient care. Come to think of it, this is also part of human nature.

Unfortunately, in healthcare, it appears to be less about ‘doing the right thing’ and more about having appropriate incentives that will create the ‘business case’ of providing safe care to patients. This mentality must change.

After publishing ‘Iowans’ Views on Medical Errors,’ I created a number of Fact Sheets that address some takeaway thoughts for patients, employers and healthcare providers. These printable documents are found in the right sidebar on this HHRI webpage. Given the importance of this week, I would like to briefly address one particular Fact Sheet, ‘8 Strategies for Hospitals and Clinics to Prevent Medical Errors.’

I clearly realize that healthcare administrators will likely scoff at my ‘attempt’ to help them reform themselves, after all, they have been doing this reformation work for years, if not decades. But it seems to me – and many national medical experts included – patient safety begins with having a legitimate culture of safety at each medical establishment. And, it begins in the boardroom on down to each department in the organization. From this embedded culture, all other safety strategies can successfully follow.

My strategies, in no particular order – follow ‘culture of safety:’

In 2017, the American College of Healthcare Executives and the Institute for Healthcare Improvement/National Patient Safety Foundation published an excellent resource to address this critical strategy for delivering safe care: “Leading a Culture of Safety: A Blueprint for Success.”

Patients experience medical errors not because doctors and hospitals wish to do them harm. Rather, unsafe care occurs because the systems and cultures of medicine influence medical providers to make decisions that don’t produce the best clinical results. It’s really quite simple. What patients want and need – coordinated and compassionate care that is affordable and safe – must align with the ‘business case’ of those who are paid to deliver it.

A ‘culture of safety’ should not just be a slogan in advertisements, but rather, THE reason healthcare organizations exist.

Over 40 years ago, our family owned a 1975 Ford Granada that was very temperamental, dying at stoplights and stop signs for no particular reason. Much too often, we would take the car to the local Ford dealership, only to learn the cause of this problem could not be correctly diagnosed. Other than trading in the vehicle for a more reliable model, it seemed that running stop lights would be our only other viable option!

Since the release of our Silently Harmed white papers, one particular section has brought a great deal of intrigue and discussion from many people who have reviewed this paper and provided feedback. The section, ‘National Data on Common Adverse Events,’ addresses seven common adverse events found within our hospitals. Not mentioned within the seven, is misdiagnosis events, which are also very common – and harmful.

Indeed, according to the journal BMJ Quality and Safety, at least one in every 20 adults (about 5 percent) who seeks medical care in a U.S. emergency room or community health clinic, may walk away with the wrong diagnosis. The analysis estimates that 12 million Americans a year could be affected by such errors.

Of those mistakes, about half – or 6 million – could potentially cause harm, according to patient safety expert Dr. Hardeep Singh, who is the first to provide robust population-level data on the impact of the problem in outpatient settings. Patients with conditions as varied as heart failure, pneumonia, anemia and lung cancer could have serious problems that remain unrecognized by a doctor.

Other safety experts laud this finding as ‘hard evidence’ about the frequency of such mistakes. Some even argue that 5 percent is the minimum because these numbers overlook other error activity.

The reasons why outpatient doctors misdiagnose patients can vary widely. Time with patients is more limited than ever and their symptoms are often complex and evaluated in what is described as “a fairly chaotic outpatient environment.” Many doctors lack the support and technical help that could free them to use consistent clinical reasoning. Adding more people to insurance coverage, a premise of the Affordable Care Act, can also stress the care delivery infrastructure, perhaps compounding an already fragile environment.

Just as Silently Harmed has attempted to grasp the number of hospital medical errors within each of the seven midwestern states, putting a population-level number on outpatient diagnostic errors can be a step toward generating greater awareness and resources to address the problem.

For patients, this important analysis should be a reminder that the doctor is not always right. Patients can play a key role in their own care by offering doctors a complete list of symptoms and a full-health history at the first visit. After the exam, they should be proactive about following up.

Unlike owning and operating a defective automobile, receiving a correct medical diagnosis from our trusted provider is critical to our physical and mental wellbeing. When it comes to our health, trade-ins are not optional.