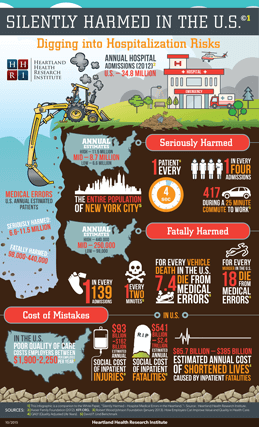 If the Centers for Disease Control (CDC) were to include preventable medical errors in hospitals as a category, it would be the third leading cause of death in the United States, behind heart disease and cancer.1

Why hasn’t there been greater public outrage concerning medical errors within the United States? Most likely it is because each preventable adverse event (PAE) happens silently, one at a time, and is not revealed to the public. The title of this infographic reflects the silent harm hospital patient’s encounter due to medical mistakes – patients who are seriously harmed and those who are fatally harmed.

Digging below the surface to find the true numbers of harmed patients becomes virtually impossible, as evidence clearly suggests that medical errors are either not reported or severely underreported in the United States.

There are five key components found in this infographic. Each component describes crucial roles that ultimately affect our society:

Our Hospitals: Above ground, our hospitals can be seen by the general public fulfilling their role as providing valuable medical care to patients who seek this critical service.  In 2012, there were 34.8 million hospital admissions in the U.S.

Look Beneath: Digging below the surface, national data suggests that millions of patients are seriously harmed due to medical errors, while hundreds of thousands are fatally harmed.

Fatally Harmed: Four icons briefly relate the significance of the mid-range estimate of 250,000 patients fatally harmed annually in our hospitals due to medical errors.

Cost of Mistakes: In addition to human lives that are tragically lost or harmed, there is a massive hidden social cost that continues to be paid year after year.

Every 4 seconds, estimates show one person is seriously harmed in a U.S. hospital...