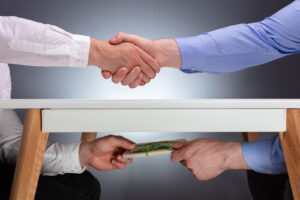 I have received a number of suggestions from individuals and organizations to assess and write about various healthcare issues that may warrant public attention – or dare I say, scrutiny.

One such topic is featured in this blog – physician income derived from third parties that pay doctors to influence the public – and their patients. Let’s call it what it is – physician conflict of interest.

I was recently contacted by an Iowa physician who shared his concern with me about major conflicts of interest regarding some physicians. His concern: Physician income from third parties, such as drug and medical device companies, influences the prescribing behavior to patients who are unaware of such relationships. As mentioned to me:

There are some physicians who feel that the government underpays for the value of their evaluation and management (E&M) codes, so they feel entitled to make money in other ways.

In particular, there is a specialist physician in the Des Moines area who gives lectures to the public and to other physicians touting some of the newer specialty drugs. This physician prescribes many of these newer drugs to patients…those same drugs manufactured by the sponsors of these lectures. To provide some context, the disease-modifying drugs for the affliction treated by this specialist 25 years ago cost $17K annually, and now costs over $90K each year.

According to OpenPaymentsData.CMS.gov, this local physician made between $459,000-$490,000 each of the last two years from mostly drug companies. Some of this pay, it should be noted, came from “clinical research” for drug companies, but the majority of this pay during 2017 and 2018 ($337,182 and $315,801) came from “general” payments that included giving talks as an ‘influencer’ or ‘thought leader’ expert. This doctor had 321 and 294 payment ‘transactions,’ which equates to an average of over $1,000 per transaction.

It is important to note that Iowa doctors in the specialty I am referring to, on average, earn around $266,000 annually, with income generally derived from insurers and direct patient care.  Given that, it would appear that this physician made more money from drug companies than from patient care. However, it is not likely the patients were aware of that fact and assumed they were prescribed drugs that were in their best interests, without outside incentives. This ethical problem occurs regardless of specialty.

In 2018, drug and medical device companies spent $11.3 million to court Iowa physicians in sales of products that use a physician’s intellectual property, speaking arrangements, consulting, travel and lodging. When ranking all states on the amount of payments made in 2018, Iowa ranks 34th.

A recent article from ProPublica addresses physician conflict of interest on a national basis. According to the article, there are approximately 1.1 million physicians in the U.S., and “more than 600,000” physicians receive payments in any given year from the drug and medical device industry. In fact, each year from 2014 to 2018, “drug and medical device companies spent between $2.1 billion and $2.2 billion paying doctors for speaking and consulting, as well as on meals, travel and gifts for them.”

This same article indicated that many studies have found links between doctors’ prescribing choices and the payments received from third parties. You can draw your own conclusions about whether this is ethically appropriate – especially without full disclosure to patients.

ProPublica reports that despite having the federal Open Payments law that requires companies to publicly disclose the payments being made to physicians and teaching hospitals, such reporting “has not dampened the enthusiasm of the drug and medical device industry for having doctors deliver talks and sponsored speeches or paying them to consult on products.”

This law requires CMS to “collect and display information reported by applicable manufacturers and group purchasing organizations (GPOs) about the payments and other transfers of value these organizations have made to physicians and teaching hospitals.”

The most important duty of any physician is to act in the best interest of the patient. It begins and ends with ethical conduct that is enshrined in the AMA Code of Medical Ethics. From this flows patient trust which can result in improved medical outcomes. We need transparency safeguards in place to assure that trust is not misplaced. 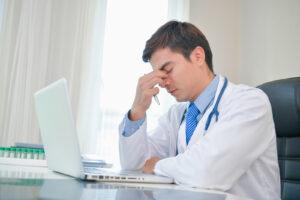 Being ethical and transparent to patients and the public about any relationship with third parties, such as drug companies, is not optional in medicine – it is essential. Posting these relationships on provider websites would be a good start. No such disclosure was publicly provided by the Des Moines physician in question. Patients should not shy from asking doctors directly about their relationship with various third parties found in the OpenPaymentsData website – monetarily and otherwise. If the doctor appears uneasy about these questions, the patient should think twice about whether that doctor is the right choice.

Whether the Iowa Board of Medicine will take action on physicians who violate ethical behaviors when accepting ‘outside’ income, is unknown. If concerned about a given physician, however, contacting the Board may be worth the effort. Public attention may possibly move the needle to warrant appropriate board ‘action.’

Ultimately, doctors’ primary responsibilities are to patients. Having clear discussions about conflicts of interest can help ensure that patients receive objective and unbiased care. Doctors must earn essential trust, one patient at a time.