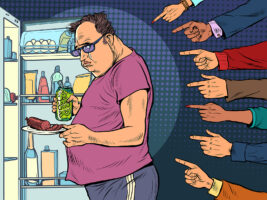 The public often views obesity as a failed lifestyle stemming from poor diet and little physical activity. Yet, research ties obesity to a variety of genetic, metabolic, hormonal and systemic factors that predispose individuals to obesity.

According to a 2016 report from NORC at the University of Chicago, almost half of Americans (48 percent) tend to believe that obesity is not a disease – it is caused and perpetuated by a person’s lifestyle choices (eating and exercise habits). In fact, the biggest barrier to weight loss, they believe, is largely due to lack of willpower, laziness, lack of self-control – all untrue stereotypes.

During the past 18 months, COVID-19 has increased awareness of obesity. This is because obesity has been identified as a risk factor for severe COVID-19 symptoms. People are increasingly expressing concern about gaining weight during the pandemic, the so called “quarantine-15.”

Researchers, however, have found that obesity, which affects at least one-third of Americans, is not caused by sloth and gluttony. According to The Centers for Disease Control and Prevention (CDC), hundreds of human genes give the body instructions for responding to changes in its environment. Individuals are attracted to inexpensive food with abundant portions. ‘Food deserts‘ are a prime example. People in a given geographical area have restricted access to affordable, healthy food options – especially fresh fruits and vegetables.  Absence of grocery stores within convenient traveling distance creates barriers to healthier eating. The CDC terms this as part of the social determinants of health, which “are conditions in the places where people live, learn, work, and play that affect a wide range of health risks and outcomes.”

In 2013, the medical community – including the American Medical Association (AMA) and other influential medical groups* – has generally reached a consensus that obesity is a disease. Part of the motivation for making this decision can be tied to pharmacotherapy and surgical intervention – both of which go beyond the standard lifestyle prescription of “improving diet and exercise more.”

Although experts have divergent views on the science of losing weight, it is the consensus of medical experts that obesity is caused by a combination of genetic, environmental, behavioral, and emotional factors. Some illnesses, such as Cushing syndrome and polycystic ovary syndrome, may lead to weight gain and obesity. Using steroids and specific antidepressants can also cause weight gain.

The Stigma of Obesity Must End

‘Lack of willpower’ is not a valid cause of obesity. It is a form of shaming based on uneducated philosophies and beliefs. Labeling obesity as simply being an individual lifestyle ‘choice’ has no scientific basis. Such stigmatization threatens the health of obese individuals, generates health disparities, and just as importantly, interferes with effective intervention efforts.

Obesity can effect individuals regardless of gender, job title, education, age, location, or political preference. However, there are known disparities in obesity rates based on race/ethnicity, gender, and socioeconomic status. The stigma, prejudice and discrimination that is pervasive in the workplace, healthcare facilities, educational institutions, mass media and other places perpetuates a narrative that it is socially acceptable to negatively stereotype obese individuals. Some argue that this stigma will help serve as a useful tool to motivate obese people to adopt healthier lifestyles…this thought process is grossly misguided.

A June 2010 paper, “Obesity Stigma: Important Considerations for Public Health,” published in the American Journal of Public Health, takes a deep dive into this issue. Obesity is a public health priority. The resultant suffering and comorbidities require local and national discourse addressing this epidemic. In short, the stigmatization of obesity is not an effective way of addressing this disease.

As mentioned in “Obesity Requires Employer Attention and Focus – (Part 1)” in this blog series, a new employer mindset must evolve to alter the alarming trajectory of the obesity epidemic. Employers have a fundamental interest in addressing this persistent health crisis. The final two segments of this obesity series will focus on approaches employers might consider when addressing obesity.

This post is the third in a five-part series. Click here to read “Obesity Requires Employer Attention and Focus – (Part 1)” and “Is the Body Mass Index (BMI) Useful? (Part 2)“.