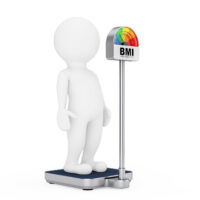 This series on obesity continues with the discussion of body mass index (BMI), and whether BMI is over-valued when assessing the health of individuals.

BMI is a medical calculation that is almost 200 years old. Developed in 1832 by a Belgian mathematician, Lambert Adolphe Jacques Quetelet, the BMI was designed to quickly estimate the degree of overweight and obesity in a defined population that would help governments decide the allocation of health and financial resources. Quetelet believed the BMI was useful only in providing a snapshot of a population’s overall health – his intent was not to measure the health of single individuals. 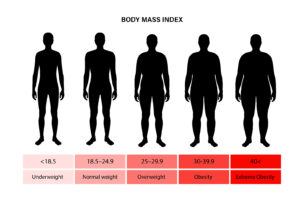 BMI is derived from your height and weight, calculated by dividing weight (in pounds) by height (in inches squared) and multiplying by 703.  If you’re curious, you can quickly learn your own BMI here. Once calculated, the BMI is compared to the BMI scale, which is broken down into five categories:

Critics believe BMI is being overused and not very useful when analyzing the health of individuals. In fact, BMI is considered too simplistic, if not misleading. The critics make a number of points, including the following factors:

These five factors give credence to the argument that BMI is both outdated and inaccurate when assessing the health of individuals.

So why continue to use BMI?

The counter-argument to continue using BMI can be equally persuasive.

Despite the concern of accurately identifying whether a person is healthy, most studies do link low and high BMI scores with a person’s risk of chronic disease and premature death. As an example, a 2017 study of 103,218 deaths found that people who had a BMI of 30 or greater (“obese”) had 1.5 to 2.7 times greater risk of death after a 30-year follow-up.

A 2014 study that included 16,868 people showed that “obese” BMI individuals had a 20 percent increased risk of death from all causes and heart disease when compared to those in the “normal” BMI range.  From this same study, researchers found that people in the “underweight” category and the “severely obese” or “extremely obese” categories, died an average of 6.7 years and 3.7 years earlier, respectively, than those in the “normal” BMI category.  Adults with a BMI greater than or equal to 40 are considered severely obese.

The data on BMI greater than 30 is quite substantial as it relates to the increased risk of chronic health issues such as heart disease, type 2 diabetes, breathing difficulties, kidney disease, non-alcoholic fatty liver disease, and mobility issues. (See references below)

In short, having a 5-10 percent reduction in an individual’s weight has been linked to decreased rates of metabolic syndrome, heart disease, and type 2 diabetes.

Despite the criticism of BMI, one can safely assume that BMI may be more useful at predicting future health – rather than diagnosing the current health.

Standard BMI definitions of overweight and obesity were based on white populations, which differs from other races and ethnic groups. Because of this, BMI should not be the only diagnostic tool when estimating a person’s risk of developing various chronic diseases. Many alternative measurement assessment tools exist to determine obesity and related health issues. The Harvard T.H. Chan School of Public Health has listed such measurements here.

Though BMI oversimplifies the health of individuals, research suggests it can serve as an important barometer to estimate a person’s risk of chronic disease, risk of early death and metabolic syndrome.

This post is the second in a five-part series. You can read “Obesity Requires Employer Attention and Focus – (Part 1)” here.