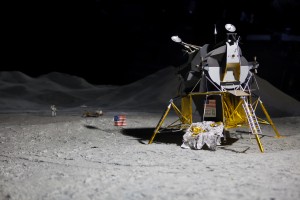 The BHAG we need in healthcare safety should be nothing short of landing on the moon.

Did you know that up to 440,000 lives are lost annually in our hospitals due to preventable mistakes?

Because of this, we desperately need a Big, Harry, Audacious Goal (or BHAG) to solve this national tragedy, and it cannot happen soon enough. By the way, BHAG was a phrase coined by author Jim Collins.

On May 25, 1961, President John F. Kennedy addressed a joint session of Congress stating that the U.S. should set a goal of “landing a man on the moon and returning him safely to the earth” by the end of the decade. By making this bold statement, Kennedy captured the attention, imagination and collective will of our country. Eight years later, his BHAG was accomplished. Amazingly, we put a man on the moon using 1960’s technology.

In December 1999, the Institute of Medicine (IOM) released a seminal book, ‘To Err is Human: Building a Safer Health System.’ This book raised eyebrows and presumably generated supposed action. Using the annual estimate of 98,000 preventable hospital deaths, the IOM report attempted to galvanize this frightening number of avoidable deaths and set forth a worthy goal: “Given current knowledge about the magnitude of the problem, the (IOM) committee believes it would be irresponsible to expect anything less than a 50 percent reduction in errors over five years.”

Was the IOM goal reached in five years? No. In 15 years? Definitely not. Based on recent reports, preventable hospital deaths in the U.S. are greater than previously understood.

In 2013, the Journal of Patient Safety estimated that up to 440,000 lives may be lost annually in our hospitals due to preventable errors – over four times the number reported by the IOM. This equates to three jumbo jets falling from our sky EACH DAY, incurring 1,200 casualties. Another 10- to 20-times this number are seriously injured in our hospitals due to preventable errors. At best, we are making glacial progress.

Since the IOM report was released, the estimated number of lives lost due to hospital errors is alarming – between 1,470,000 and 6,600,000. Why such a chasm in numbers? Most errors go unreported for various egregious reasons. Our cobbled ‘system’ may kill as many people every eight days than were lost on 9/11 and in the Iraq and Afghanistan wars (9,469). Since 1999, more Americans have needlessly died in our hospitals than had died or were wounded throughout our entire history of wars (2.7 million).

‘To Err Is Human’ suggests that the problem is not bad people working in healthcare, but good people working in bad ‘systems.’ It is ironic that the very system we trust to ‘do no harm’ causes a great deal of lethal harm. Unlike actual jets falling from the sky, lives lost in our hospitals happen silently, one at a time. These fatal errors cannot be managed and improved if they are not first acknowledged and measured. Trust must be earned in healthcare, not blindly given. Without broad and consistent public outrage, this national tragedy will continue to persist with little hope of sustained improvement.

In our 2014 Iowa Employer Benefits Study, a top priority of Iowa employers is patients’ safety of care. Employers correctly perceive the safety issue has been inadequately addressed.

Because healthcare is local, solutions must be local. Hospital board members must insist that patient safety is paramount in setting their hospital’s long-term vision and mission. Their safety culture should permeate throughout the entire organization through policies, decision making, resource allocation, and most importantly, complete public transparency. Embracing this culture with words alone is nothing more than deceptive marketing fluff that silently kills.

If efforts to reach the moon were similar to how we confront safety of care, we would still be floating in boundless black space with little hope of reaching our destination. The BHAG we need in healthcare safety should be nothing short of landing on the moon by having the courageous willpower to get there – just like we did in the ’60s.